February's special focus was Synergy ®, a.k.a. Larry Fast. Known for synthesizer programming and playing keyboards for such notables as Wendy Carlos and Peter Gabriel, Larry's Synergy ® project shows his compositional skills in electronic, art rock, and film music genres. He will be appearing at NEARfest in June. (Check out the events page.)

March's special focus was the

It occurred on April 10th in Huizen, the Netherlands at the Theatre 3-in-1 and featured the music of RAMP, Redshift, Stratosphere, T-Bass UK, and Tim Blake.
April's focus was on British synthesist Paul Nagle and his music from the

Paul, who is a prominent member of the GoldTri mailing list, has many CDs and tapes to his credit.

On my first show, I promised that the fans of Deep Cuts wouldn't be totally abandoned. Deep Cuts was the show that used to occupy the time slot where Galactic Travels now resides. It was a Progressive and Art Rock show. To keep that promise I made, oh so long ago, May's focus was on NEARfest, the North East Art Rock Festival. Guest Chad Hutchinson, VP of NEARfest and author of the Ghostland Progressive Rock web site, introduced the Galactic Travels audience to the music of the artists appearing at the two-day festival. After all, space music's roots are in space rock, a sub-genre of progressive rock.

The special focus for July was Steve Roach. Steve constantly explores new sonic territory. He is such a prolific composer, Galactic Travels keeps returning its focus on Steve, time and time again.

The special focus for August was the collaborative efforts of Belgium musician Vidna Obmana. 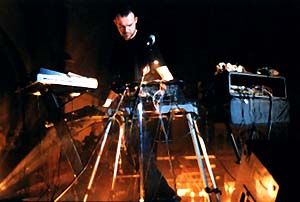 The special focus for September was Utah musician Robert Carty. This prolific composer, though unsigned, deserves widespread recognition. He releases his music on his CDR label, Deep Sky Music, and provides unique artwork on the label and cover of each CDR! 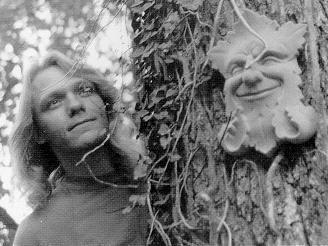 Can you tell which one is Robert?

A New Label For A New Music

The special focus for November was DiN. DiN was formed to meet the needs of a new music for the new millennium and to bring diverse musicians and artists together to ask the question, "What if ? . . ." DiN aims to promote and produce up to the minute music and to provide a platform for music that stretches across the range of contemporary electronica.

The special focus for December was Robert Rich. Robert's 1996 concert in Allentown was the first music played on this program.